So I guess Joan Rivers is not offended by Gwyneth’s comment about her Botox.

If you’ve been following the drama, Gwyneth made a comment that “at least I don’t look like Joan Rivers” to Harper’s Bazaar.

But Joan didn’t seem to be offended.  She has a strong personality and is used to being ridiculed in the media (i.e. recently being called “fat”) etc.

Her reaction to this was, “First reaction: ‘Ooh, she watches ‘Fashion Police!” Rivers told People. “It just made me laugh. She says Botox made her scary like Joan Rivers? She should see what I look like without Botox. That’s really scary.” 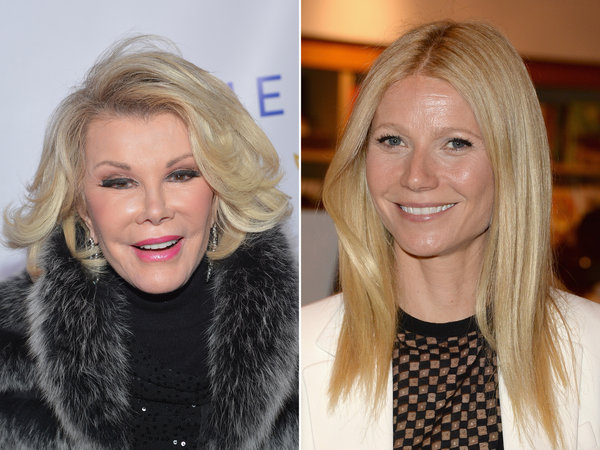 Joan Rivers also told HB that she called to give her statement rather than writing it in because, “so much Botox in my thumbs, I can’t type.” BAHHAHAHA. lolz.

“I’ve always been open about what I do, because I want [women] to be able to get Botox and not look like a Sharpei,” she added. “[Lying about having work done] is such a put-down to women. It says to the average woman: ‘I’m beautifully naturally and you’re not.'”

Lets see how Gwyneth looks when she is Joan’s age, and if she is still looking good then!