Scientifically, Xeomin is the same chemical as Botox.

Xeomin is produced and manufactured by Merz Pharmaceuticals.  It has been approved by the US Food and Drug Administration for treatment of adults with cervical dystonia or blepharospasm. The Botulinumtoxin blocks your body’s nerve activity in its muscles, which causes a temporarily reduces muscle activity.
There were 2 major clinical trials in the US, which led to the Food and Drug Administration approving it.  The Journal of Neurological Sciences did a study and deemed it “non-inferior” to Botox (equal to) while used in equal doses to treat similar symptoms. The FDA stated that Xeomin is safe and ready to use as a substitute or replacement for Botox. 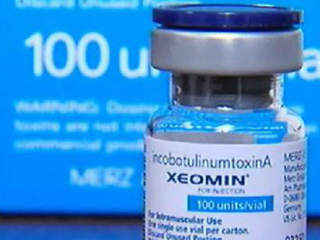 Both Xeomin and Botox work in the same way.  They paralyze the effected muscles and fills in wrinkle lines.  The active ingredient is the same, however Botox has an accompanying protein.

Xeomin and Botox work the same way to paralyze muscles and smooth wrinkles. They share the identical active ingredient – botulinum toxin A. The difference is that Botox has an accompanying protein, but xeomin is naked.

Dr. Grant Stevens stated, “Xeomin is another neurotoxin – it is in the same category as Botox and Dysport.  It has been used in Europe for many years.  It has less proteins then Botox, possibly making it less stable and possibly reducing the chance of resistance.  We have been using it in our office for a while and have had results consistant of Botox so far – however the cost to the consumer is cheaper with Xeomin as it stands now. ”

Both Botx and Xeomin (as well as Dysport) are commercially made formulations of the Clostridium Botulinum bacteria.  It has been used in Europe for the past 5 years (2008-20013) mainly in Germany.  It is now being used in Europe, Asia, Canada, and the US.

Specialists say that 1 unit of Botox = 1 unit of Xeomin.  The main (claimed) advantage of Xeomin is that it claims to have removed additional proteins at higher dosages.

Many doctors are reporting that Xeomin works just as well, and they actually prefer it to Botox due to its price.