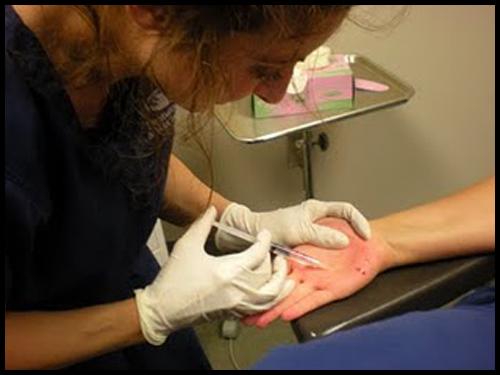 As if people were not tired of hearing the horrible trend of “First World Problems,” there is a 17 year old girl whose life may as well be ruined after actually solving her medical condition. It is no surprise that Botox is used to cure excessive sweating in the underarms, but to take a needle and inject Botox into your hand to get rid of your sweaty palms? No, thank you.

Now, as the procedure would eliminate the young girl’s sweaty palms, the latest issue of the dermatology archives highlights that she also lost her ability to text with her thumbs. The overall procedure will make anyone cringe with:

– 30 injections to the palm

– 3 injections in each finger

Props to this girl for being able to have a needle put into her hands a total of 66 times within one session, because NBC News reported it was an “uncomfortable, but not excruciating ordeal,” again, no, thank you.

It was not until after the timeline for the side effects ran out that she still realized that her thumbs were not working the right way. The doctor’s actually gave this girl’s dilemma a name, calling it “transitory texting impairment,” so, is this now going to become a legitimate medical excuse for people? Because although texting is horribly addicting and it seems to make the world go round, it does not need to be in the name of a medical condition. Anyways, the 17-year old did not have to deal with not being able to text ever again, because after six weeks, her thumbs were back to texting and the procedure outcome lasted five months.